Section 96 of the Companies Act, 2013 By CS Brajesh Kumar and CS Rahul Das

As per Section 96 of the Companies Act, 2013 (“Act”), every Company other than OPC shall in each year, hold a General Meeting as itsAnnual General Meeting (“AGM”). Every Company shall hold its first AGM within nine months from the date of closing of the first financial year of the Company and thereafter in each year within six months from the closure of the financial year, such that the interval shall not be more than fifteen months between two successive AGM

Section 96 requires that the subsequent AGM should be held on the earliest of the following dates:

(a) fifteen months from the date of the last AGM; or

(b) six months from the closure of the financial year.

The Registrar of Companies (“RoC”) may extend the time for holding theAGM, other than the first AGM, “for any special reason” by a period not exceeding three months, if it cannot be held within the prescribed time limit.

Extension for Companies whose financial year has ended 31.12.2019

Due to disruption caused by COVID-19 Pandemic, the Companies were facing difficulties in holding AGM. Therefore, various representations were made before the Ministry of Corporate Affairs (MCA) to permit them to hold their AGM beyond the statutory period provided in Section 96 of the Act. The MCA vide its circular dated 21st April, 2020 (for link click here)has granted extension for holding AGM by 9 months for such Companies, whose financial year has ended on 31st December, 2019. Therefore, such Companies can hold its AGM by 30th September, 2020.

Extension for such Companies whose financial year has ended 31.03.2020

Considering the COVID-19 Pandemic and the difficulties for holding AGM by the Companies for the financial year ended 31st March, 2020, on 10th September, 2020, the RoC from different jurisdictions has granted extension for holding AGM, for all Companies by 3 months i.e. up to 31st December, 2020 without obtaining theapproval in Form GNL-1. The orders of respective RoCs are available at homepage of MCA Website.For link click here.

The applications already filed in Form GNL-1 but not approved or rejected are also covered in the above orders. This is the first time that such relief has been given to all companies due to uncertainties suffered fromCOVID-19 Pandemic.

The time gap between 2 AGMs can exceed more than 15 months?

There is lot of confusion amongst the people whether the time gap between 2 AGMs provided in Section 96 of the Act can exceed 15 months or not?

As per as per Secretarial Standard-2 issued by ICSI, the time gap between 2 AGMs cannot exceed more than 15 months. The aforesaid period of six months or interval of fifteen months may be extended by a period not exceeding three months with the prior approval of the Registrar of Companies, in case of any AGM other than the first AGM.

In such a case, the gap between 2AGMsmay be more than the period of fifteen months stipulated under sub-section (1) of Section 96 of the Act. However, in such a case it should be ensured that the concerned AGM is actually held on or before the extended time limit and the Notice should specify the fact of extension of time for holding the Annual General Meeting.

The overall time gap between 2 AGMs cannot exceed 18 months (15 months as per Act + 3 months extension) in any case.

Contact me Click here to view my all Articles Follow User
Previous article Compliance Calendar for the Month of October, 2020 By CS Lalit Rajput
Next article Recommendations of the 42nd GST Council Meeting held on 5th October, 2020 By FCS Rohit Kumar 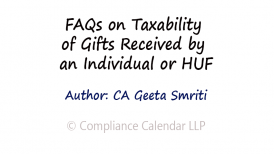 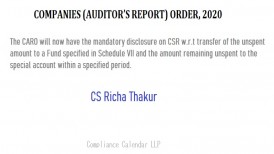 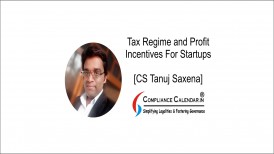 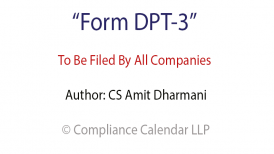 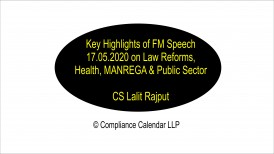 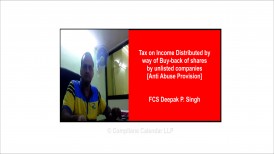