This article covers only the main aspects and crux of the beneficial owner. An attempt is made to clear practical issues

NOTE: A SHAREHOLDER WORD IS USED IN THE BELOW ARTICLE AT MANY PLACES WHICH SHALL BE CONSIDED AS MEMBER OF THE COMPANY.

EFFECT OF SIGNIFICANT BENEFICIAL OWNER UNDER ICDR AND LODR

ICDR 2018: Disclosure in the prospectus

In this connection, on 8 February 2019 the MCA issued the Companies (Significant Beneficial Owners) Amendment Rules, 2019 (Amendment Rules), making necessary amendments to the reporting Form and the rules to address certain concerns raised by stakeholders. 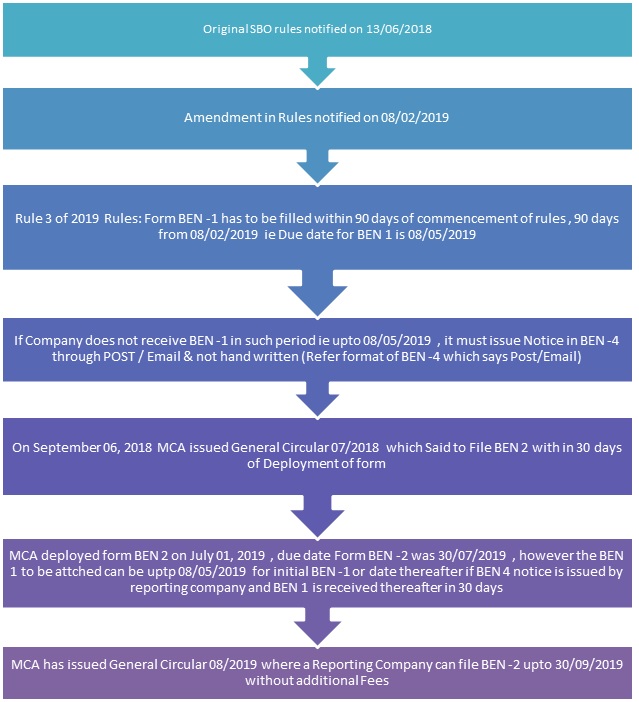 Many times it is not possible that Registered owners and Beneficial owners are same , Say a Company cant come in General meeting though it holds name in the Register of Member, nor can HUF , Partnership firm , or Trust can. Though not all indirect holding is considered as SBO, purpose of BEN 2 is to identify real owner who can exercise power in reporting company.

Following is summary form whom BEN -1 is required:

ALL FORMS UNDER SBO BEN FORMS:

WHO IS SBO AND WHO IS NOT AN SBO?

Below are the examples in each case representing the SBO

CASES SBO IS NOT APPLICABLE

→BEN- 2 is not applicable to OPC and Government Companies,

In simple language, an individual who is holding indirectly through its direct holding 10% or more of shares or 10% of more of voting right or is entitled more than 10% of dividend or exercises significant influence or control, in any manner other than through direct holdings alone is an SBO

Note: Voting right includes voting of shares which carry voting right apart from Equity. Instead of carring the definition ahead we shall continue with illustrations to identify SBO . For Eg as the preference shares shall come into picture when the dividend is unpaid for two or more years, it will carry a voting right. Similarly future warrents or convertible instruments which are to be converted in future into equity shall not be considered in voting right.

SBO IN CASE OF INDIVIDUAL

SBO IN CASE OF COMPANY

→ Majority stake is to be identified in case of a company: where Majority Stake menas

(i) holding more than 50% of the equity share capital in the body corporate; or

(ii) holding more than 50% of the voting rights in the body corporate; or

→ But if such 2 individual  who are holding 50% shares and are acting together then SBO is required.( Refer at the ending for attaching optional attachment for point 3(C) )

There may be many cases in practice, the ultimate beneficiary is to be seen if that comes wih no end there is no SBO , best examples will be cross-holding ending up with no SBO’s.

LLP is kept out of the preview of Body Corporate

NOTE: THE COMPANY CANNOT HAVE MORE THAN 2 LAYERS OF SUBSIDIARIES AS PER 186 AND CRL RULES.

Before going to below example kindly thing that a General Meeting is called can an individual shareholder who will now be decoded as a SBO exercise the right in the target company in general meeting, if yes upto what extent. A company which has a company below it but does not built Ultimate holding company then the layer is cut. See explanation of Exp III (i) (b)

SBO IN CASE OF HUF

SBO IN CASE OF MINOR

The minor share will be clubbed in major’s shareholding, here the relationship of acting together can be established if its has said following Example.

Eg: A Company has ABC HUF where ABC is a Karta, Mr. D is a minor in karta and Mr, D is also Shareholder of the target Company, here acting together can be established as the minor is acting through Major and through Karta of HUF.

However the holding of shares by a Minor through a guardian amounts to Direct holding and will not be considered under the provisions of SBO.

Acting together can be established when in relationships like Joint holders, Minor major or other relations. It does not mean that the board unanimously approves the resolution and the Board comprises of relative are acting together. A board has to run unanimously, acting together has to be proved through intention and confirmed through the practical situations.

Its better to have a declaration when the holders are Husband wife or brothers that they are not acting together to avoid confusions and make the decision of beneficial in the proper manner.

SBO IN CASE OF PARTNERSHIP FIRMS AND LLPS

SBO IN CASE OF TRUST

The SBO shall be the individual in relation to the pooled investment vehicle, who,-

SECTION 89 ( MGT- 4 , 5 AND 6) : MGT-4 and MGT-5 are to be submitted with the Company within 30 days of acquisition of such shares or beneficial interest and the Company is to file these declarations in form MGT-6 to MCA within 30 days of receipt of above-mentioned declarations. Section 89 talks about holding beneficial interest whereas Section 90 talks about Significant beneficial owner and the reporting are accordingly different.

It is applicable on all the Companies except those mentioned in Rule 8 of SBO Rules, and the Company limited by Guarantee is not exempted

Form is not taking more than 10 digit FCRN then mention upto 10 digits only, in case it is less than 10 digit add sufficient zero’s

The SBO may have Significant influence and indirect control and not majority stakeholder, in such case Check form will have an error when number 1 is entered and mandatory ask for Majority Stakeholder details, put zero in “No. of member through which control/significant influence is exercised” and then fields A to D will be disabled and now Section E we can enter details. Its advisable to attach a clarification letter in this regards and file the form that respective in optional attachment along with Screenshot errors. A ticket raised in regards can also be attached in such clarification.

→ Portal is generating SBO ID for each PAN per entity , error fetched in form CIN is not associated with this ID

→ SBO ID can be used in more than 1 company, if same person is SBO in more than 1 Company but there is a technical error that form BEN-2 is not taking same SBO id for two companies. A ticket may be raised for the same until MCA clarifies on this issue.

Filling of Form for Subsidiaries:

Except CIN of holding Reporting Company. Further in attachment  BEN  - 1 of holding reporting company has to be attached.

Number of SBO’s in one form:

If same SBO comes in indirect holding say through HUF and also through same person is SBO through another chain say a majority stakeholder through Company then such option is to be exercised.

In Point E (m) details of direct holding is to be mentioned.

An additional attachment is to be attached in the situation like in case of bodies corporate it may happen individual is not holding majority stake but are SBO because of acting together, as there is control or significant influence,

Just for prescrutiny purpose the Point C can be justified by additional attachment . This does not means he/she holds majority stock they are acting together and each person BEN-1 to be attached. This situation comes when there is control or significant influence but no majority stake

After upload of the form 10 digit SBO ID will be created. You shall use the same ID if the person is SBO of other Company

The SBO or BEN-2 is a very innovative and practical facing topic, this article only covers basic aspects, any specific information that has been wrongly presented above can be communicated at the mentioned address. Practical situation may differ from above examples as there may be cross holdings, or structured holdings. Any professional who come across any error or mis represented examples can contact me personally as this is open for discussion.

Requirements for Listing on SME Exchange By FCS Shweta Gupta 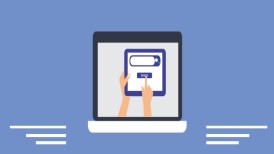 How can we check whether FSSAI license number is valid? Contributed by Anjali Devri

Investment in Certificates of Deposit (CDs) - Reporting in Form ‘A’ Return

Lack of clarity over date for dividend tax worries Street

5249 + People Trust Us
To Get Their Daily CCNewsletter On
Corporate Laws, Taxation and Business Ecosystem