POSH Act: The Sexual Harassment of Women at Workplace By CS Annu Sharma

Smiles for you all

Hoping You all are well During this Pandemic!

In today’s Topic, I am going to write down about very serious topic for working women. Its an attempt which makes our professionals much more aware about the safety of woman at work place to give her safe working environment, I.e. to protect her from being harassed at work place.

I am forced to Pen Down this write up today because recent I came to know that one of my fellow faced some mental harassment just because she could not take action on the incident happened with her, So for you all who are engaged in any business entity may take benefit of it and also let others to get benefitted.

This Incident happened just after the resume of business activity, post lockdown she joined office almost after 1 month and she asked for more leaves since she has small child at home whom she can’t send to crèche as per present scenario and also due to work load at her place she couldn’t give her 100% at work. The organization where she was working for more than 2 years the employer on her request replied that “instead of working from home you have done so much enjoyment, just look how much fatty you become” and you are asking for much more leaves.

For some people this conversation might be very normal but for her it was a torture at front of office staff but she couldn’t take action as there was no internal complaint committee to report about this, Even though there, Director’s Report had a clause regarding the same hopefully no other women would face such kind of mental harassment here we start discussing about the POSH Act.

The Sexual Harassment of Women at Workplace (Prevention, Prohibition and Redressal) Act and the Rules (collectively known as POSH Laws) have been enacted and passed by the Ministry of Women and Child Welfare, in the year 2013. These laws are applicable upon every workplace, establishment, company, and organization, inclusive of MNCs, firms, shops, restaurants, etc.

LET’S FIRST START WITH THE APPLICABILITY OF THE ACT.

The Prevention of Sexual Harassment (POSH) at workplace Act is applicable to every workplace, establishment, company or organization employing 10 or more employees (full time, part time, interns or consultants included) irrespective of its location or nature of industry.

This is a pro tip for the professionals, Specially Company Secretaries if in your Organization number of employees are more than 10 then implement the same today if not yet applied.

Non-compliance with POSH (Prevention of Sexual Harassment) can cost an employer a monetary penalty of INR 50,000. On repeated non-compliance, the employer may be penalized with twice the punishment. Non-compliance can also lead to cancellation of license, withdrawal or non-renewal of registration for carrying on business, by the Government or local authority.

It has been made mandatory to include a statement in the Director’s report that the company has complied with provisions relating to the constitution of the Internal Complaints Committee (ICC) under POSH laws.The Companies (Accounts) Rules, 2014 have been amended to mandate the disclosure regarding the implementation of the Sexual Harassment of Women at Workplace Act (POSH laws) in the Director's report of every company.

WHAT ARE THE COMPLIANCE UNDER THIS ACT ?

The Ministry of Corporate Affairs, through a Notification dated July 31, 2018, amended the Companies (Accounts) Rules 2014, in accordance with the request made by the Ministry of Women and Child Welfare.

By this amendment, it is now mandatory to disclose that the company has implemented the provisions of the Sexual Harassment Act.

It is now compulsory for a company to make a statement in the Director’s Report that it has complied with the provisions regarding the constitution of the Internal Complaints Committee (ICC).

This amendment comes as a major step towards making the workplaces in the private sector safer for women, thereby casting higher responsibility on the Board of Directors to ensure compliance under the POSH Laws. Penal provisions that ensue in case of non-disclosure under Section 134 of the Companies Act will now be levied in the matters of non-disclosure of the implementation of the Sexual Harassment Act as well.

Every employer is obliged to constitute an ICC through a written order. The ICC will be composed of the following members:

Employers/District Officers are responsible for complying with prohibition, prevention and redress of workplace sexual harassment. In practice, this means having a policy that:

(2) champions prevention of workplace sexual harassment through orientation, awareness and sensitization sessions; and

(3) provides a detailed framework for redress.

DISSEMINATION OF INFORMATION AND AWARENESS GENERATION

Employers/ District Officers have a legal responsibility to:

As per Prevention of Sexual Harassment Act, 2013, there are 2 reports to be submitted by the employer:

The POSH Act prescribes the following grounds which would disqualify a person from membership of the ICC:

On occurrence of any of the above grounds, the applicable member(s) would have to step down and be replaced with individuals possessing suitable qualifications as applicable to the relevant category of membership.

WHO IS A DISTRICT OFFICER (DO)?

As per the Act – “(I) The Internal Committee or the Local Committee shall in each calendar year prepare, in such form and when may be prescribed, an annual report and submit the same to the employer and the District Officer.

The District Officer will forward a brief report on the annual reports to the appropriate State Government. Such reports must include the following information:

The Report of ICC will be forwarded to the DO through the employer.

Section 22 – Employer to include information in the Annual report

As per the Act – “The employer shall include in its report the number of cases filed, if any, and their disposal under this Act in the annual report of his organisation or where no such report is required to be prepared, intimate such number of cases, if any, to the District Officer.”

The latest Director’s Report submitted under the Companies Act has a section to capture the compliance to the PoSH Act, 2013. This report is filed along with the Annual returns to the Registrar of companies.

The POSH Act prescribes that failure by an employer to constitute an ICC is an offence punishable with fine for an amount of up to Rupees Fifty Thousand. Further, an employer convicted for the same offence at the second instance may be punishable with a fine for twice such amount, as well as be liable to cancellation or non-renewal of its business licenses, registrations or approvals by the government or local authorities. 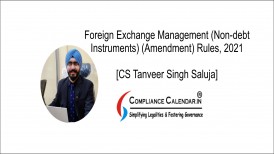 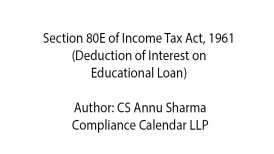 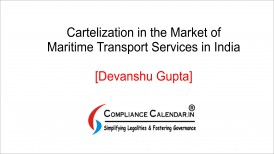 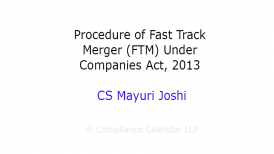 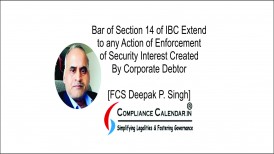 Bar of Section 14 of IBC Extend to any Action of Enforcement of Security Interest Created By Corporate Debtor [FCS Deepak P. Singh] 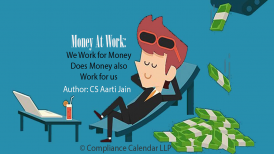 Money At Work: We Work for Money, Does Money also Work for us By CS Aarti Jain