This article will explain the new enhancements done in the E- Way Bill (EWB) generation form and is being released on 01.10.2018. The purpose of this article is to communicate the latest changes with screenshots and make them understand and prepare them while generating the E-Way Bills from 01.10.2018.

Following are the enhancements done in the E-Way Bill generation Form:

1. Display of only relevant document names in “Document Type” drop-down list based on the selected Transaction “Sub Type”. 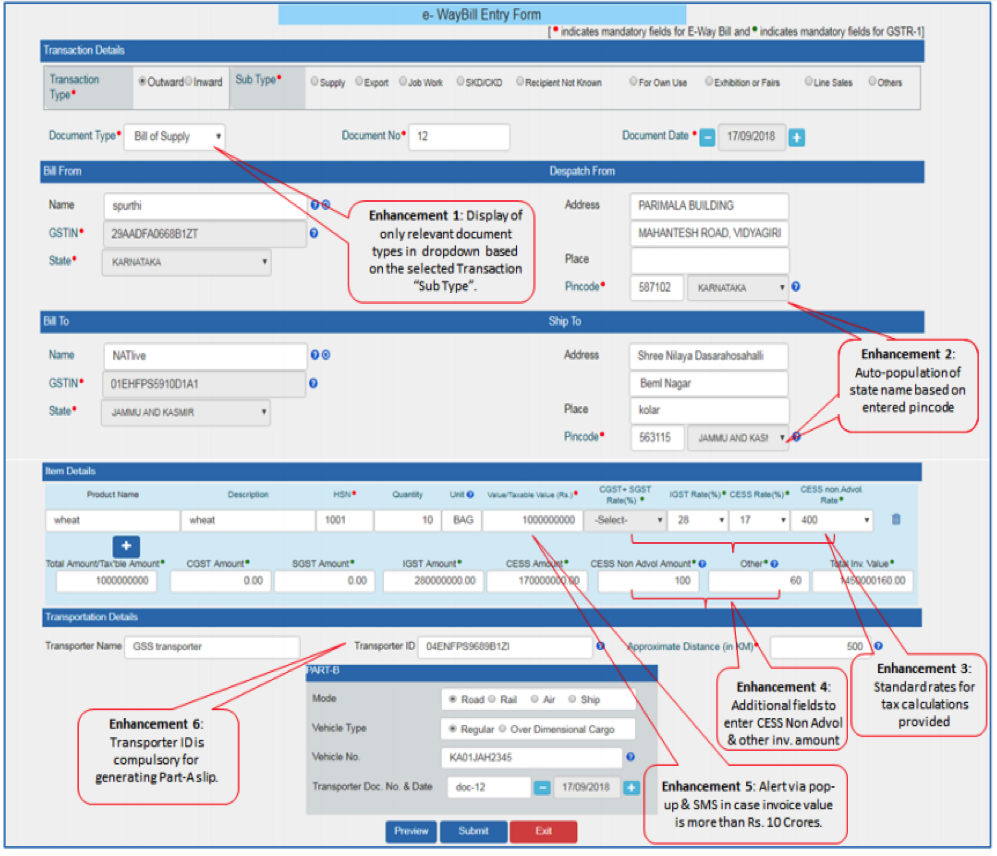 In the new version, once the user selects the Transaction type and Sub Type in ‘Transaction Details’ section, the system will display only the relevant document types in ‘Document Type’ drop down pertaining to the selected sub-type as shown in below tables.

Case I: Outward Transactions, if generator is consignor 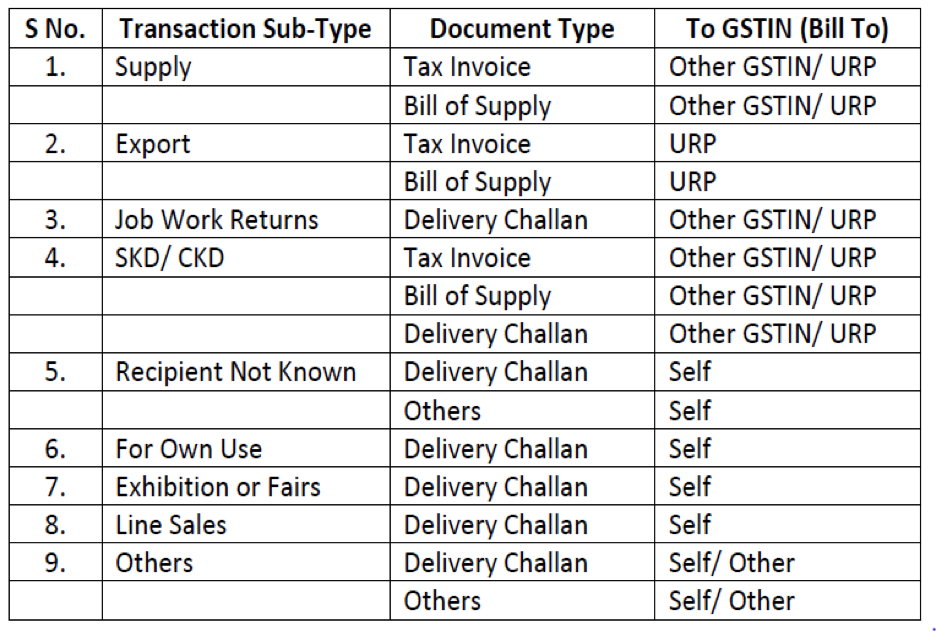 For example: If the user selects the Transaction Sub-Type as “Supply” for Outward supplies, system will display only Tax Invoice and Bill of Supply in the ‘Document Type’ drop-down list unlike in the previous version where system used to display all the document types irrespective of the ‘Transaction Sub-Type’ selected by the user.

2. Auto-population of state name based on the entered PIN code

In the new version, once the taxpayer enters the pin code in “Bill From” & “Bill To” sections, state name will be auto-populated based on the entered pin code.

In exceptional cases where one pin code belongs to more than one state (e.g. some places in Hyderabad & Telangana), the system will show the names of the concerning states in the drop down. The user can then select the actual state and proceed further. Auto-population of state will avoid the chances of errors by taxpayers while generating the EWB.

3. Auto-population of Standard rates for tax

In the new version of EWB entry form, the standard rate of tax (%) is being auto-populated in the drop down while entering the HSN code. The taxpayer has to select the applicable tax rate slab (in %) from the drop-down and based on this, the system calculates and auto-populates the CGST, SGST, IGST & CESS amount etc.

A new tax rate field namely “CESS Non Advol Rate” has been introduced wherein the ‘CESS non- Advol Tax rate’ in Rupees can be selected by the taxpayer as applicable.

The purpose behind providing the drop downs for applicable tax rates and introducing additional tax fields is to avoid chances of errors in entering the tax rates and also to match the values in the invoice and e-way bill.

The following list of rates of tax will be validated. 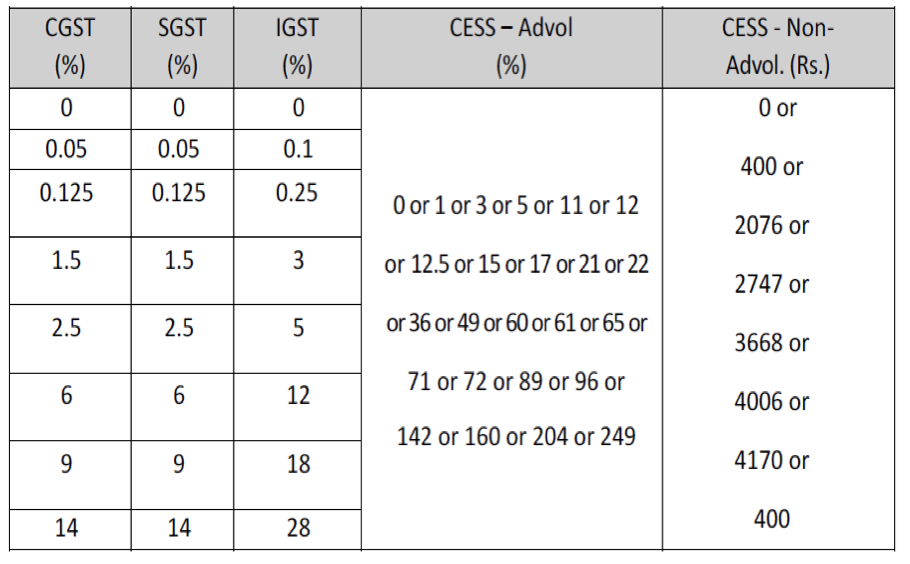 4. Additional fields for entering the invoice amount have been introduced

The additional fields for entering the amounts namely ‘CESS Non-Advol Value’ & ‘Other Amount (+/-)’ have been introduced. ‘Other Amount’ column can be used, to enter any other charges written in the invoice or any discount provided, so that ‘Total Invoice Value’ will match with the Invoice for which e-way bill is being generated.

The system will not auto-populate the CESS Non Advol amount as it depends upon the quantity and unit. Hence the taxpayer has to manually enter the same in ‘CESS non-Advol. Amount’ field.

It is to be noted here that:

5. Alerting the generator of the EWB through SMS and pop-up, in case the total invoice value is more than Rs. 10 Crores.

In the new version, in addition to the pop-up displayed at the time of entering the total invoice value in the old version, an additional pop-up will be displayed at the time of submission of the form. An SMS will also be sent to the generator alerting him that invoice value of EWB is more than Rs. 10 Cr. This will assist him to correct/cancel if it has been entered wrongly.

SMS and pop-up will alert the generator regarding the higher EWB value so that in case the actual value is less than Rs. 10 Cr. but user enters the higher value due to typo mistake etc., the same can be acted upon accordingly.

6. Transporter ID is made compulsory for generating Part-A slip

As per the new e-way Bill rule, the e-way bill can be generated by the taxpayer after entering the Part-B. If he is not having he part-B and transporter are going to update the Part-B, then he/she has to compulsorily enter the transporter id to generate the ‘Part-A Slip’.

Applicability and Key Highlights of The Producer Companies Rules, 2021 By CS Lalit Rajput

Did you know ? Now SFIO can arrest people for violations of Company Law By CS Gaurav Kumar