Discussion on Amendments carried by Ministry of Corporate Affairs dated 22nd October, 2019 in following rules for effective implementation of Section 150 of the Companies Act, 2013 (‘hereinafter called ‘the Act’)-

The theory of having Independent Director was a welcoming step for corporate governance in India under the Companies Act, 2013 which was never defined in the Companies erstwhile.
Before the commencement of the 2013 Act, the definition of 'Independent Director' was adopted from provisions contained in Clause 49 of the listing agreement which was proposed to be followed by all listed public companies.
However, after the commencement of the Act, 2013 related to 'Independent Director' in Clause 49 of the Listing Agreement, The Securities and Exchange Board of India were aligned with the definition in the 2013 Act, though some difference remained.'
Companies where ID’s are required to be appointed………………..?
As per Rule 4 of Companies (Appointment and Qualification of Directors) Rules,2014:-
The following class or classes of companies shall have at least two directors as independent directors
(i) the Public Companies having paid up share capital of ten crore rupees or more; or
(ii) the Public Companies having turnover of one hundred crore rupees or more; or
(iii) the Public Companies which have, in aggregate, outstanding loans, debentures and deposits, exceeding fifty crore rupee

Manner & Selection of Appointment of such ID:
• ID being a person of wisdom, vision and sound judgement requires proper scrutiny before they are appointed on board.
• They Act as guide to the Company with their independency and credibility ensuring implementation of good corporate governance.
• ID’s have greater responsibility than the normal directors.
Resulting Companies Act, 2013 provides for specific provisions under Section 150 “for selection of Independent Director from a data bank containing names, addresses and qualifications of persons who are eligible and willing to act as Independent Directors, maintained by any body, institute or association”
Thereafter on 22 October 2019, the Ministry of Corporate Affairs (MCA) has issued certain notifications relating to the creation and maintenance of the data bank for independent directors

INDEPENDENT DIRECTOR DATABANK
The Ministry of Corporate Affairs, along with IICA (Indian Institute of Corporate Affairs) with the objective of strengthening the institution of Independent Directors under the Companies Act, launched the Independent Director’s Databank in accordance with the provisions of the Companies Act, 2013 under SEC 150 and the rules made thereunder.
Are the notified rules dates 22nd October 2019, and effective from 01st December 2019?
As per the expression in sec 150 ….” maintained by  any  body, institute  or  association maintained by  any body,  institute  or association”  denotes  “The  IICA (Indian Institute of Corporate Affairs)
INDEPENDENT DIRECTOR DATABANK
Independent Director Databank: A portal where all Existing ID’s and willing to be ID are required to register themselves in order to carry their appointment as ID in Companies.
The Databank, which was launched by Secretary Ministry of Corporate Affairs, can be accessed
at www.mca.gov.in or www.independentdirectorsdatabank.in
It provides a platform for grooming of ID through:
wide array of e-learning courses on various topics including the Companies Act, Securities laws, basic accountancy, board practices, board ethics and board effectiveness.

A number of value added services are expected to be rolled out through the portal for capacity building of Independent Directors.

APPLICABILITY OF RULES
Who are required to Register themselves with “Independent Directors Databank
APPLICABILITY OF RULES
Whether ID’s are required to appointed from databank so developed and maintained by IICA….?
YES: The interpretation of the expression “an independent director may be selected from a databank….” Under section 150 of the CA, 2013 stands changed. Earlier as there was no database maintained for ID, they were appointed randomly from industry, however, the interpretation has been affected by the amended rule 6 of Companies (Appointment and Qualifications of Directors) Rules, 2014 and Rules 3 and 4 of Companies (Creation and Maintenance of databank of Independent Directors) Rules, 2019.
• So for existing ID's, they have to enrol themselves with Institute within 3 months from commencement of rule i.e. 01st December 2019 (as per Text of Rule 6(1)(a)) and
• For newly appointed ID they have to get enrol with institute before such appointment's (as per Text of Rule 6(1)(b)).
APPLICABILITY OF RULES
Please note further:
Earlier Implementation of Section 150 of the Act, was discretionary, however after the introduction of amended Rules as mention in previous slide:
It becomes mandatory and disciplinary compliance, GOI, has taken a very important initiative in the direction of regulating even the ID

• Ministry themselves wants to have control and monitoring of database of ID in in accordance with the provisions of the Companies Act, 2013

• It further provides for wide array of value added service in addition to registration process for grooming of ID, so the best person is appointed on board of Company

• Joint Initiative haven’t recognised by three institute.
Therefore One can conclude ID should register with MCA database only.

REGISTRATION PROCESS:
The registration process has been specifically designed to be quick and simple and has been divided into three simple steps:
• Log in through the user account on the Website of the Ministry
• Upon log in the user will be directed to the Databank
• Choose one of the Subscription Plans to access the e-learning and the e-proficiency assessment modules
A publication named “Independent Directors Databank-Handbook covering key objectives, empanelment/registration process of individual or corporate and the knowledge resources available on the portal was also released. 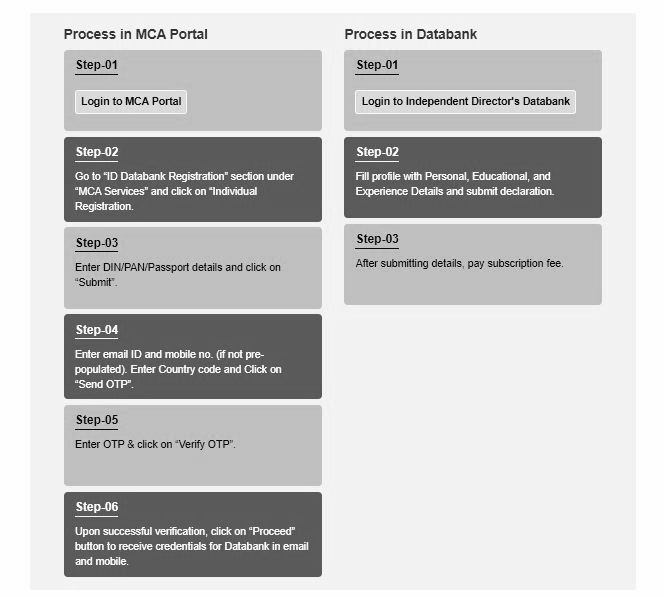 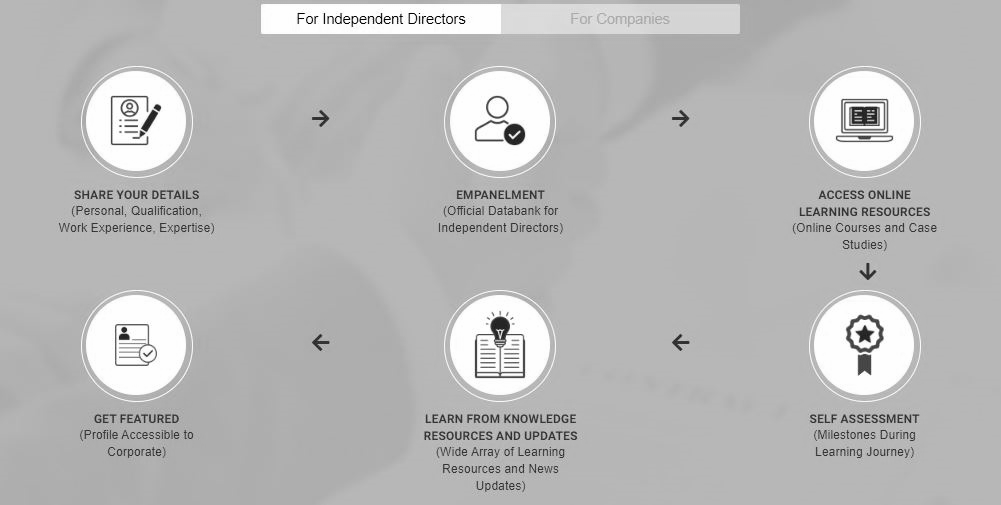 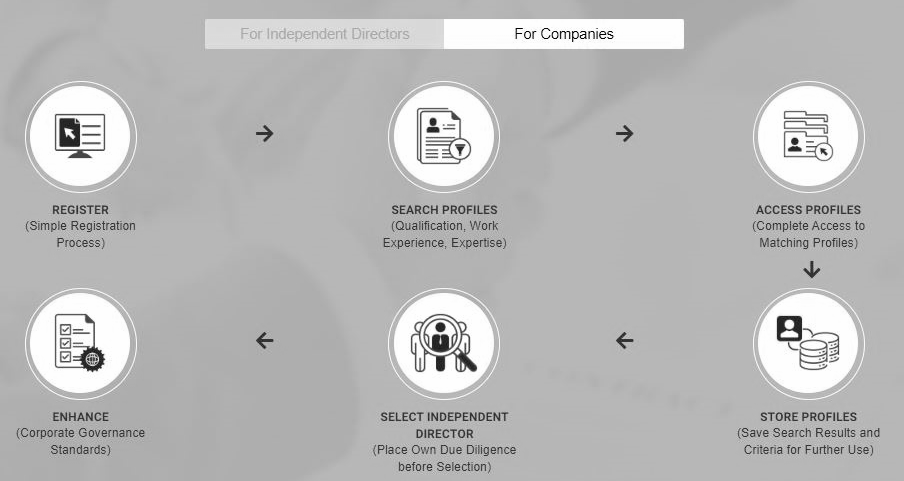 PROCEDURAL ASPECTS:
•  Existing IDs need to register themselves within 3 months of commencement of Rule i.e. last date for them to register is 29th February, 2020.
•  Individuals proposing to be ID should get themselves register before their appointment
•  The databank which can be accessed www.independentdirectorsdatabank.in' would provide platform for the registration of independent directors
at         'www.mca.gov.in'         and an easy to access and navigate
•  Such Databank will be an online databank that shall be placed on the website of the Institute.
• Duration of Enrolment: ID's can get enrol themselves for a period of 1 year/ 5 years/ lifetime on payment prescribed fees
•  No renewal application is required to be filed by ID’s who has enrolled for lifetime
•  Any changes in particulars so filed can be made within 30 days of such changes through a web -based portal
•  Declaration  Filing  (Additional  Step):  Every Independent Director, alongside filing declaration with the Board of the company where he has been appointed as such, declaring his independence in terms of Section 149(7), additional declaration for compliance with subrules (1) and (2) of Rule 6 of Companies (Appointment and Qualifications of Directors) Rules, 2014.
• Appearing for Examination: Every person, whose name has been so included in the database, shall give another test (namely proficiency self-assessment test) within one year from the date on which his name has been included, failing which his name shall be removed.
•  Every  ID  whether  Existing  or  new  is  required  to  appear  for  the examination, once their name is enrolled in the database
•  The score for passing Examination: The minimum score require passing the online proficiency test has been kept at 60%.
• No maximum number of limits has been imposed for attempting the proficiency test.
• Exemption from appearing Examination: The individual who has served for a period of not less than 10 YEARS as on the date of inclusion of his name in the databank as director or key managerial personnel in a listed public company or in an unlisted public company having a paid-up share capital of rupees 10 Cr. or more shall not be required to pass the online proficiency self-assessment test.
NOTE: They have to pass test to demonstrate their knowledge and proficiency in certain areas for board level functioning in corporates.
As such no minimum knowledge or specific educational qualification have been specified for them, except when they are part of Audit Committee.
As per Rule 5 of Companies (Appointment and Qualification of Directors) Rules,2014 which states about Qualifications of independent director.— that he should be person with “appropriate skills, experience and knowledge in one or more fields of finance, law, management, sales, marketing, administration, research, corporate governance, technical operations or other disciplines related to the company’s business.”

QUERIES:
A: YES, ONCE NAME OF INDIVIDUAL IS REGISTERED WITH INDEPENDENT DIRECTOR DATABANK PORTAL, INDIVIDUALS HAVE TO PASS AN ONLINE PROFICIENCY SELF ASSESSMENT CONDUCTED BY IICA WITHIN 1 YEARS OF TIME SPAN FROM THE DATE OF THEIR ENROLLMENT.
A: PLEASE NOTE INDIVIDUALS HAVE TO APPEAR AS WELL PASS THE EXAM WITHIN STIPULATED TIME PERIOD, OTHERWISE THEIR NAME SHALL STAND REMOVED FROM THE DATABANK.
A: NO, NEW INDIVIDUALS CANNOT BE APPOINTED AS ID IF THEY DON’T GET THEMSELVES REGISTER AND CLEAR THE EXAM.
A: THE LAW HAS SOME OPENINGS AND IS CONFUSING AT SOME PLACES. IT IS NOT CLEAR WHETHER EXISTING DIRECTORS WILL VACATE THEIR OFFICE IF THEY DO NOT PASS SUCH TEST OR IF THEY DO NOT ENROL IN SUCH DATABANK. WILL THE APPOINTMENT OF AN INDEPENDENT DIRECTOR WHOSE NAME DOES NOT APPEAR IN SUCH REGISTER BE INVALID OR WILL THIS BE MERELY A VIOLATION OF LAW?

A: THE MINIMUM SCORE REQUIRE PASSING THE ONLINE PROFICIENCY TEST HAS BEEN KEPT AT 60%.
HOWEVER SIMILAR QUESTION CAN BE RAISED FOR A PERSON WHO HAS NOT PASSED THE TEST WITH THE MINIMUM PERCENTAGE OF MARKS. THE INTENTION APPEARS TO BE THAT SUCH PERSONS CANNOT BE APPOINTED AND IN RESPECT OF EXISTING INDEPENDENT DIRECTORS, THEY MAY VACATE THEIR OFFICE.
BUT THERE IS NO BAR IN NUMBER OF ATTEMPTS FOR APPEARING FOR EXAM.

A: SOME QUESTIONS ARE REMAINED UNANSWERED, INTERPRETATION CAN BE FORMED THAT AN INDIVIDUAL CANNOT CONTINUE AS ID OR BE APPOINTED AS ID UNTIL N UNLESS INDIVIDUAL CLEARS THE EXAM, THOUGH THEY CAN CONTINUE AS NORMAL DIRECTOR IN COMPANY
PANEL CONSTITUTION BY IICA
•  Institute shall constitute of panel not more than 10 members appointed by CG for purpose of designing study material and other related matters thereto
•  Dignities as follow from different background:
(a) Secretary, Ministry of Corporate Affairs or his nominee;
(b) Director General and Chief Executive Officer of the institute or his nominee;

(c) one member nominated by the Department of Economic Affairs;

Contact me Click here to view my all Articles Follow User
Previous article Checklist of Secretarial Audit As Per LODR And Companies Act, 2013 By CS Tanuj Saxena
Next article Valuation Requirements Under Various Statutes By CS Shweta Dubey

GST: ONE NATION, ONE TAX, ONE MARKET, Compiled by CS Rahul Harsh

Leadership is not my Cup Tea By CS Annu Sharma

Embargo lifted on grant of Government Business to Private Banks

State Development Monitor for the Month of February 2021

More About KUNAL A CHAUHAN

5387 + People Trust Us
To Get Their Daily CCNewsletter On
Corporate Laws, Taxation and Business Ecosystem