International Financial Reporting Standards (IFRS) are the set of global accounting principles and standards that are required to be followed while accounting for transaction and events in financial statements. The main objective behind IFRS adoption by International Accounting Standards Board (IASB) was to have uniform accounting standard across all countries. The IFRS conceptual framework is an attempt to determine nature and purpose of accounting. The purpose of IFRS is to provide information to determine how a particular transaction should be accounted.

Historical evidence indicates that in absence of conceptual framework, some accounting standard were in conflict with accounting principle of prudence and accrual, many standards were internally inconsistent and few standards were not consistent with other accounting standard. In many cases, the standard setting was based on individual concept of each participant of standard setting board. This led to development of rule based accounting, which is regarded as prescriptive and inflexible. So, to ensure that ‘principle based standard’ is developed to provide consistent accounting pronouncement over time.

Benefits of Global Accounting Standard:
Due to emergence of Make in India concept, Modi Government is making all efforts to attract foreign Investments in our country. As a result of which many foreign companies are setting up their business in India. So in order to converge the Accounting Standard of that country, it is required to adopt some common standards which would be beneficial for the companies to disclose their financial statements in transparent & fair manner.
The following are the benefits of IFRS:

If the company is following local GAAP, the foreign investors perceive the presence of accounting risk in such statement. Accounting risk refers to risk involved in analyzing and interpreting financial statement that follows different GAAP. Thus, the financial statement prepared in different GAAP, affects the financial ratio, which is a key factors in lending decision by bankers and for compliance with debt covenant. If IFRS based standard are adopted, capital market regulators must be aware of only one set of accounting standard and the companies will experience efficiency in raising capital and reduced information processing cost.
If IFRS is adopted, then it would provide consistent presentation of financial statement along with uniform measures for recognition, measurement and disclosures of financial transaction. It will lower complication in taxing global income, as the taxes are levied on the total income of the companies, and the company along with its foreign subsidiary.
IFRS cover a wide range of accounting activities. There are certain aspects of business practice for which IFRS set mandatory rules.

In addition to these basic reports, a company must also give a summary of its accounting policies. The full report is often seen side by side with the previous report, to show the changes in profit and loss. A parent company must create separate account reports for each of its subsidiary companies.
IFRS Developments in India:

The Indian GAAP is influenced by several standard setters and influenced by Statute, namely Companies Act, Income Tax Act, Banking Regulation Act, Insurance Act etc and directions from regulatory bodies like RBI, SEBI, IRDA.
The legal or regulatory requirement will prevail over the IFRS requirement, in case of conflicts. Therefore, pre-conditions for IFRS adoption by India to be effective need amendments in required legislation and clarity on impact of IFRS adoption on Direct and Indirect taxes, especially transactions recorded at fair values.
Under the statutory mandate provided by the Companies Act, 2013 the Central Government of India prescribes accounting standards in consultation with National Advisory Committee on Accounting Standards (NACS) established under the Companies Act, 2013. While doing so the Central Government had adopted a policy of enabling disclosure of company account in a manner at par with accepted international practices, through a process of convergence with the IFRS.
Impact of IFRS on Financial Statements:
a.) Differences in the Balance Sheet: The accounting treatment of inventory, property & equipment, and goodwill etc shows differences while preparing financial statements as per U.S. GAAP and IFRS.
Two inventory method standards normally used in the past were FIFO (first-in, first-out) and LIFO (last-in, first-out). However, LIFO is not allowed under IFRS, so firms that have used LIFO will have to change their inventory method to FIFO.

Property & equipment i.e. fixed assets are reported at their initial cost less the accumulated depreciation. U.S. GAAP does not allow any upward adjustments of property and equipment, whereas under IFRS they can. This can have a profound impact on a firm's reporting. For example, if equipment is marked down, it results in a loss on a firm's income statement. However, if the asset is then marked back up under IFRS from an increase in value, then the adjustment is recorded as a gain, up to the initial cost. Any further upward adjustment will be reported directly to equity.

b.) Differences in the Income Statement: Some differences lie within how cost of goods sold is determined, the operating expenses, and construction contracts. The criteria for revenue and revenue recognition under U.S. GAAP and IFRS are slightly different.

Since LIFO is not allowed under IFRS, LIFO firms have to convert their inventory into FIFO terms in the footnotes of the financials. This difference is known as the LIFO reserve, and is calculated between the COGS under LIFO and FIFO. The benefit in doing this is an increase in the comparability of LIFO and FIFO firms.
This has an effect on the financials of a firm. In particular, during periods of high inflation, a firm that uses LIFO will report higher COGS and lower inventory as compared to a firm that uses FIFO. Higher cost of goods sold results in lower profitability and lower profits results in lower income taxes. Lower profits will also result in lower equity for the firm, which affects retained earnings in a negative way. In contrast, in a low inflationary period, the effects mentioned are reversed. Something to keep in mind for analysts converting LIFO firms to FIFO.

IFRS does not differentiate between expenses and losses, but U.S. GAAP does. With IFRS, any losses that are due to a firm's main business are included in its operating expenses.

Stages of IFRS Implementation:
Indian companies looking at International Financial Reporting Standards (IFRS) implementation will have to enable technology applications based on the impact assessment. The company which is adopting IFRS is required to establish proper team who will assess the areas wherein implementation will cause direct effect on financial statements.

Under planning phase, company is required to implement a policy change like configuration & up gradation of the IT systems, Risk mitigation and currency conversion and accordingly blue prints of the design should be prepared as IFRS implementation process.

Challenges towards implementation of IFRS:

Conversion or Adoption of IFRS by Indian Company:

India today has become an international economic forum. Indian companies has surpassed in several sectors of the industry that includes, ITES, software, pharmaceutical, auto spare part to name a few. And to stay as a leader in the international market India opted the changes it need to interface Indian stakeholders', the international stakeholders' and comply with the financial reporting  in a language that is understandable to all of them. In response to the need several Indian companies have already been providing their financial statements as per US GAAP and/or IFRS on voluntary basis. But, however this is becoming more of a necessity then just being a best practice.

In the coming years, critical decisions will need to be made regarding the use of global accounting standards in India. Market participants will be called upon to determine whether achieving a uniform set of high-quality global accounting standards is feasible, what sort of investments would be required to achieve that outcome, and whether it is a desirable goal in the first place. This dialogue will be critical to the future of financial reporting and of fundamental importance to the long-term strength and stability of the global capital markets.

International Financial Reporting helps the regulatory agencies in benchmarking the accounting accuracy. Sufficient efforts by local accounting body are required to enable companies to adopt IFRS and the companies have to incur substantial cost in preparing statement as per IFRS. However, the Companies will derive long term benefit from using IFRS standard for reporting its financial transaction. Convergence of IFRS with Ind AS will facilitate the foreign companies to prepare their financials in accordance with the prevailing standards. This will also lead to reduction in the double disclosure on part of companies, thereby relaxing Corporates from burden of extra compliance. Harmonisation will have direct effect on cross border capital flows thereby growing number of foreign direct investments and mergers & acquisitions at international level. 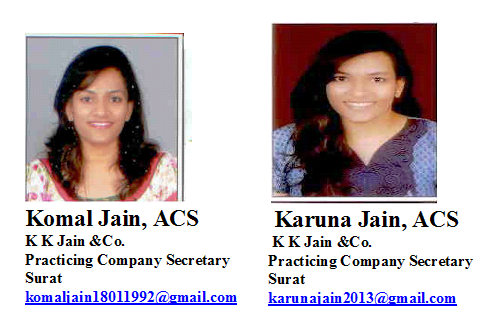 Awareness Of Legal Metrology Act in India by Harshdeep Narula

421 % Growth in number of projects completed under Smart Cities Mission

ICSI Guidelines for Attire and Conduct of Company Secretaries, 2020

ICSI Guidance on Scale of Fees for Professional Services, 2020

New President and Vice President of ICSI for 2020

Overwhelming Response to GSTR 3B for December 2019

Introduction of Rupee derivatives at IFSC

NBFCs can pool gold jewellery from different branches for Auction

5164 + People Trust Us
To Get Their Daily CCNewsletter On
Corporate Laws, Taxation and Business Ecosystem