RBI, Articles, Knowledge, Compliance,
FCRA refers to Foreign Contribution Regulation Act. All Charitable Organizations receiving foreign contribution come under the purview of this Act. NGOs find themselves in a constant need for donations, including foreign ones.

Following are the conditions that make you eligible to apply for FCRA Registration:
1. The NGO should actually exist.
2. There should have been no prosecution against the NGO for the following:

As per Section 2(1)(h) of FCRA, 2010, Foreign Contribution means the donation, delivery or transfer made by any foreign source –
i. Of any article, not being an article given to a person as a gift for his personal use, if the market value in India, of such article, on the date of such gift, is not more than Rs. 25000/-, (as may be specified by Central Government from time to time, by the rules made by it in this behalf);

ii. Of any currency, whether Indian or Foreign;

iii. Of any security, as defined in clause (h) of Section 2 of the Securities Contract (Regulation) Act, 1956 and includes any foreign currency as defined in clause (o) of Section 2 of the Foreign Exchange Management Act, 1999.
Explanation 1: A donation, delivery or transfer of any article, currency or foreign security referred to in this clause by any person who has received it from any foreign source, either directly or through one or more persons, shall also be deemed to be foreign contribution within the meaning of this clause.

Explanation 3: Any amount received, by any person from any foreign source in India, by way of fee (including fees charged by an education institution in India from foreign student) or towards cost in lieu of goods or services rendered by such person in the ordinary course of his business, trade or commerce whether within India or outside India or any contribution received from an agent of a foreign source towards such fee or cost shall be excluded from the definition of foreign contribution within the meaning of this clause.

“Foreign source” includes, —
i. the Government of any foreign country or territory and any agency of such Government;
ii. any international agency, NOT being the UN or any of its specialised agencies, the World Bank, IMF or such other agency as the CG may, by notification, specify in this behalf;

iv. a corporation, not being a foreign company, incorporated in a foreign country or territory;

v. a multi-national corporation referred to in sub-clause (iv) of clause (g);
vi. a company within the meaning of the Companies Act, 2013, and more than one-half of the nominal value of its share capital is held, either singly or in the aggregate, by one or more of the following, namely:-

ix. a society, club or other association of individuals formed or registered outside India;

x. a citizen of a foreign country
Sec 3 specifies which group of people are prohibited from accepting Foreign Contribution. But not all Foreign Contribution accepted by such people is prohibited. Those transactions which are NOT PROHIBITED are specified in Sec 4. In other words, Sec 4 describes specific exemptions to people who are covered in Sec 3.

The two types of FCRA registration are as follows:
Criteria for each type of Registration
Prior Permission: Following is the eligibility criteria for the prior permission certificate:
-Address of the donors
-Designation of the donors
-Cause for which the donors are contributing
Permanent Certificate: This particular form of registration is valid for up to 5 years, and has the following criteria:
-Pan Card
-The By-Laws
-The MOA and the AOA

With FCRA registration on its side, a section 8 company/NGO/public trust can reach out to international bodies like the following for donations:

Prohibition to transfer Foreign Contribution to other Person:-

Both transferor and transferee are registered and granted a certificate or have obtained prior permission under this Act.
Exception:

On following certain PROCEDURE, transfer of upto 10% of total Foreign Contribution received in that Financial Year can be done if ONLY THE TRANSFEROR is registered and granted a certificate or has obtained prior permission under this Act. Transfer should be reflected in return under Form FC-5 filed by transferor and recipient.

Grant of Certificate of Registration:
1. Application for Certificate/Prior Permission shall be made to Central Government.

4. Certificate/ Prior Permission shall:

5. A person shall not be eligible for Certificate/Prior Permission, if his certificate has been suspended and such suspension of certificate continues on the date of making an application.
6. Certificate is valid for a period of five years and the Prior Permission shall be valid for the specific purpose or amount of Foreign Contribution.
Condition for an inquiry by Central Government:

The following CONDITIONS are inquired into by Central Government before granting Certificate/Prior Permission:

(a)  the person making an application for Registration /Prior Permission:

(b) the person making an application for REGISTRATION has undertaken reasonable activity in its chosen filed for the benefit of the society for which the Foreign Contribution is proposed to be utilised;

(c) the person making an application for giving PRIOR PERMISSION has prepared a reasonable project for the benefit of the society for which the Foreign Contribution is proposed to be utilised;

(d) in case the person being an INDIVIDUAL, such individual has neither been convicted under any law for the time being in force nor any prosecution for any offence pending against him;

(e) in case the person being OTHER THAN AN INDIVIDUAL, any of its directors or office bearers has neither been convicted under any law for the time being in force nor any prosecution for any offence is pending against him;

(g) the acceptance of foreign contribution referred to in sub-Sec (1),—

i. Central Governemnt may, in writing, SUSPEND the CERTIFICATE for upto 180 days, if it is satisfied that it is necessary to do.
ii. Such action shall be pending consideration of the question of ‘CANCELLING the CERTIFICATE’ on any of the grounds mentioned in Sec 14(1)

iii. Every person whose certificate has been suspended shall:

Cancellation of Certificate:
i. Central Government may by order CANCEL THE CERTIFICATE, if satisfied after inquiry that :
ii. Before cancellation of certificate every person concerned shall be given a opportunity of being heard.
iii. Once cancelled, person shall not be eligible for Registration/Prior Permission for a period of 3 years thereafter.
Renewal of Certificate:

i. Certificate u/s 12 shall be renewed within 6 MONTHS BEFORE THE EXPIRY OF THE PERIOD of the certificate.

ii. Application shall be made to the Central Government

iv. Renewal of Certificate shall be for 5 years.
Foreign Contribution Bank Account:

i. Person granted Registration/Prior Permission u/s 12 shall RECEIVE Foreign Contribution in a single A/c of a single bank branch.

ii. Multiple accounts in multiple banks for UTILISING the Foreign Contribution received by him can be opened.

iii. Except Foreign Contribution nothing shall be received or deposited in such account or accounts.
Annual Filling:

An Organization permitted to receive Foreign Contribution has to mandatorily submit an annual return in form FC-4 accompanied with income and expenditure statement, balance sheet and statement of receipt and payment duly certified by a Chartered Accountant. 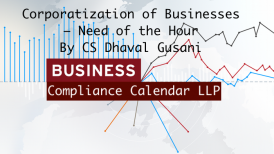 Corporatization of Businesses – Need of the Hour By CS Dhaval Gusani 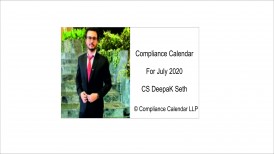 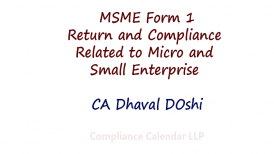 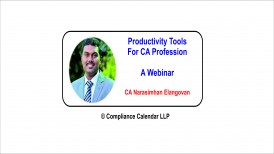 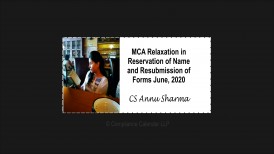 MCA Relaxation in Reservation of Name and Resubmission of Forms June, 2020 By CS Annu Sharma 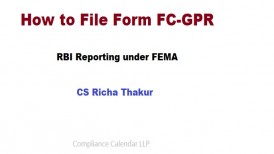