Ministry of Corporate Affairs has issued an advisory notice on its website that Directors who are associated with the companies which have not filed financial statements or annual returns for any continuous period of 3 FY or Directors associated with recently closed Shell Companies, should not make any application for name availability or for Incorporation of Company. If such application been made, such application shall be rejected and may attract the penal provisions under the Companies Act, 2013. 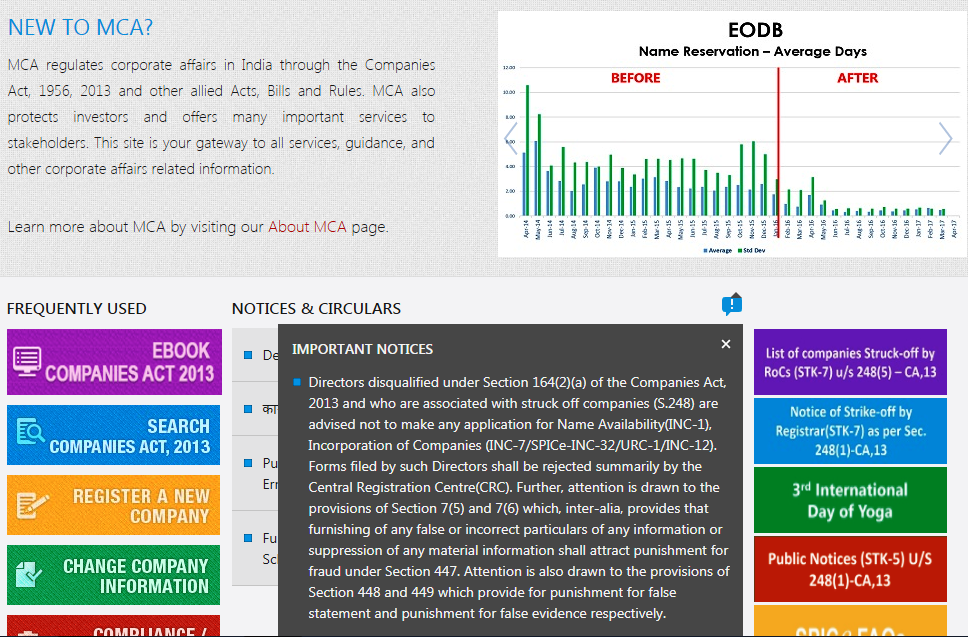 Directors disqualified under Section 164(2)(a) of the Companies Act, 2013 and who are associated with struck off companies (S.248) are advised not to make any application for Name Availability(INC-1), Incorporation of Companies (INC-7/SPICe-INC-32/URC-1/INC-12). Forms filed by such Directors shall be rejected summarily by the Central Registration Centre (CRC). Further, attention is drawn to the provisions of Section 7(5) and 7(6) which, inter-alia, provides that furnishing of any false or incorrect particulars of any information or suppression of any material information shall attract punishment for fraud under Section 447. Attention is also drawn to the provisions of Section 448 and 449 which provide for punishment for false statement and punishment for false evidence respectively.

No person who is or has been a director of a company which has not filed financial statements or annual returns for any continuous period of three financial years; shall be eligible to be re-appointed as a director of that company or appointed in other company for a period of five years from the date on which the said company fails to do so.


(1) A person shall not be eligible for appointment as a director of a company, if

(a) he is of unsound mind and stands so declared by a competent court;

(b) he is an undischarged insolvent;

(c) he has applied to be adjudicated as an insolvent and his application is pending;

(d) he has been convicted by a court of any offence, whether involving moral turpitude or otherwise, and sentenced in respect thereof to imprisonment for not less than six months and a period of five years has not elapsed from the date of expiry of the sentence:

Provided that if a person has been convicted of any offence and sentenced in respect thereof to imprisonment for a period of seven years or more, he shall not be eligible to be appointed as a director in any company;

(e) an order disqualifying him for appointment as a director has been passed by a court or Tribunal and the order is in force;

(f) he has not paid any calls in respect of any shares of the company held by him, whether alone or jointly with others, and six months have elapsed from the last day fixed for the payment of the call;

(g) he has been convicted of the offence dealing with related party transactions under section 188 at any time during the last preceding five years; or

There are two modes of strike off under the provisions of the Act and Rules made therein as below:

2. By way of filing application by the Company under Section 248(2)

The Ministry of Corporate Affairs ("MCA") vide Notification1 dated 26.12.2016 notified Section 248 to 252 of the Companies Act, 2013 ("Act") and revised the process of striking off the name of the company from the register of companies maintained by the Registrar of Companies ("ROC").

In pursuance of section 248(1) read sub rule (1) of Rule 3 of these rules, the ROC may remove the name of a company from the register of companies in terms of sub-section (1) of section 248 of the Act.

Section 248(1) of the Act provides that, "where the ROC has reasonable cause to believe that:

(a) a company has failed to commence its business within one year of its incorporation; [or]

(b) a company is not carrying on any business or operation for a period of two immediately preceding financial years and has not made any application within such period for obtaining the status of a dormant company under section 455,

ROC shall send a notice to the company and all the directors of the company, of his intention to remove the name of the company from the register of companies and requesting them to send their representations."Accordingly, the ROC may initiate the process of Strike Off if the company has failed to commence its business within one year of its incorporation or had not been doing business or operation for last two financial years and has not applied with the ROC for the status of dormant company.

Contact me Click here to view my all Articles Follow User
Previous article Give ‘N’ Take Law on Loans: Law on taking and giving By CS Varun Kapoor
Next article Exemption to certain unlisted public companies from the appointment of Independent Directors By CS Gaurav Kumar

Disclosures By Securities Holders And Transfer of Securities Compulsorily In Dematerialized Form – Why Did The Need Arise? By CS G.Sriram | Partner at Mamta Binani & Associates

Brief Analysis on the Report of the Personal Data Protection Bill, 2018 By CS Yash Mehta