(1) Notwithstanding anything contained in this Constitution,—

(a) the provisions of article 238 shall not apply now in relation to the state of Jammu and Kashmir;

(i) those matters in the Union List and the Concurrent List which, in consultation with the Government of the State, are declared by the President to correspond to matters specified in the Instrument of Accession governing the accession of the State to the Dominion of India as the matters with respect to which the Dominion Legislature may make laws for that State; and

(ii) such other matters in the said Lists as, with the concurrence of the Government of the State, the President may by order specify.

(c) the provisions of article 1 and of this article shall apply in relation to that State;

(d) such of the other provisions of this Constitution shall apply in relation to that State subject to such exceptions and modifications as the President may by order specify:

Provided that no such order which relates to the matters specified in the Instrument of Accession of the State referred to in paragraph (i) of sub-clause (b) shall be issued except in consultation with the Government of the State:

Provided further that no such order which relates to matters other than those referred to in the last preceding proviso shall be issued except with the concurrence of that Government.

(3)Notwithstanding anything in the foregoing provisions of this article, the President may, by public notification, declare that this article shall cease to be operative or shall be operative only with such exceptions and modifications and from such date as he may specify:
Provided that the recommendation of the Constituent Assembly of the State referred to in clause (2) shall be necessary before the President issues such a notification.

Article 370(1) in itself gives overriding effect to constitution of India. However, the Clause a , b , c and d are worth to look into  in order to understand the true depth of its meaning.

Clause b provides Power of Parliament to make laws for state of J&K. However, Clause b is not an absolute Provision in itself and clause b(i) and clause b(ii) require Parliament to get concurrence or consultation of Government of State of J&K.  Thus, it means that the Parliament is not Powerless to make laws on matters listed in Union list & concurrent list for State of J&K. However, such a Power is subject to Concurrence or Consultation of Government of J&K.

Clause c made Article 1 of constitution of India applicable to State of J&K.

Clause d is very important to understand. Clause d can be said as residual Power of Parliament to make laws for state of J&K. However, Clause d is also not an absolute Provision and subject to two proviso. The Proviso I to clause d make its reference to Power of Parliament under Clause b (i) and Proviso II seem like covering the matters other than those of clause b(i).

Article 370(2) somewhere conclude and repeat the mandate of Article 370(1). It briefly states that the Concurrence of State of J&K require for giving effect the  Clause b(ii) or 2nd Proviso to Article 370(1)(d).

Article 370(3) is key Provision of this Article. It empower the President by order to either make Entire Article 370 as inoperative or to make it Operative with some exceptions and modifications. However, again to pass any order under Article 370(3), the recommendation of constitution assembly of state of J&K is required which is Practically not possible because the constitution assembly for State of J&K has dissolved long back in 1950.

What Exactly we understood?

So, the Position is 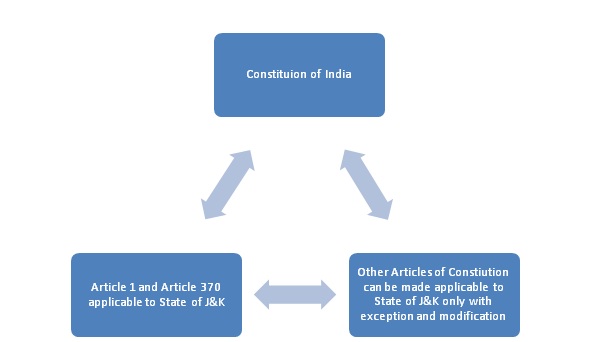 However, the Other Articles can be made applicable to state of J&K only by two ways,

So Practically Article 370 cannot be scrapped because Article 370(3) require the President Order on recommendation of Constitution assembly of J&K which has been dissolved way earlier.

Knowing that the Article 370(3) Order cannot be passed without recommendation of Constitution assembly of J&K. Thus, the President has passed an order Article 370(1)(d) to amend Article 367 by adding clause 4 to Article 367.

Article 367 is outline certain guidelines to interpret the constitution of India. Article 367(4) added by President Order under Article 370(1)(d).

It has added that the:

Impact – The Parliament/ President now would required the consent of governor of state of J&K instead of earlier requirement of that of Legislative assembly.

Impact- President in order to scrap or to modify Article 370, need the consent of Legislative assembly for State of J&K. This change has now delete the Practical impossibility to scrap Article 370 by President Order.

Since, the State of J&K is under President rule. Hence, it is deemed that the concurrence of Governor of State of J&K obtained. So due to President Rule in J&K , it become easier to dodge away the Concurrence Condition under Article 370(1)(d).

Thus, now the Parliament can make laws for matters as refereed under Article 370 by more easier and convenient way just by getting consent of Governor of State of J&K. (earlier which was dependent upon whims & mercies of Legislative assembly of J&K)

However, to Scrap the Article 370 in totality, the consent of Legislative assembly of J&K is still required. (as mandate of Article 370(1)(d)).

The views and opinions expressed in this article are those of the authors and do not necessarily reflect the official policy or position of any agency of the Indian government. Examples of analysis performed within this article are only examples. They should not be utilized in real-world analytic products as they are based only on very limited and dated open source information. Assumptions made within the analysis are not reflective of the position of any Indian government State.

The author is company secretary by qualification and is undergoing its management trainee with a reputed corporate law firm. Further, he is a Second Year Law student at faculty of law, University of Delhi. He is also enrolled as Para Legal volunteer with Delhi State Legal Service authority and also active Participant in Moot Court.

Extension till 30th June, 2020 for applying for Renewal of Food Licence/Registration By CS Deepak Seth

5945 + People Trust Us
To Get Their Daily CCNewsletter On
Corporate Laws, Taxation and Business Ecosystem